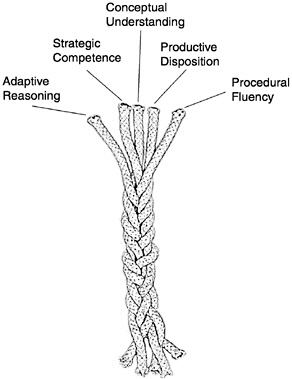 When I first discovered The Gary and Jerri-Ann Jacobs High Tech High I was astounded at what students were creating through the project-based learning style.  It wasn’t until years later after teaching at a more traditional school, that I had my opportunity to teach at High Tech High.  My development as a math teacher has been influenced mainly with my personal upbringing and experience of math classes and teachers.  The period would consist of the teacher explaining a concept and as students we practiced this method many times with problems from our textbook.


In the book Adding It Up, Jeremy Kilpatrick, Jane Swafford, and Bradford Findell explore the definition of math proficiency.  They argue that math proficiency is made up of five key components that are interwoven together. Those five components are conceptual understanding, procedural fluency, strategic competence, adaptive reasoning and productive disposition.  In traditional math classrooms that I and many other students have experienced consist mostly of the first two strands of what the authors define as math proficiency.  Students are introduced to major concepts of math and specific subtopics.  With practice of procedures they are on the way to becoming more proficient in math.  However, a lot of classes stop there after the first two keys.  Going beyond to the other keys of math proficiency require other pedagogical strategies.  One such strategy is project-based learning.

Project-based learning and Math
Project-based learning and a more traditional view of math teaching seem to be on two opposite sides of a spectrum.  On one end you have a student-centered experience where the teacher is seen as a facilitator as students create, evaluate, struggle, redesign and present their work.  An example of this could be one of the projects that our students completed that tried to answer the question, “What is a viral video?” using statistics, standard deviation and spreadsheet technology.  Students created their own specific sample size of videos and collected relevant data about their videos.  Numbers like the amount of views, likes and subscriptions were collected within a very specific category.  They used spreadsheet technology to calculate useful statistical information like standard deviation and averages to see if they would define viral as a video that is mathematically an outlier, or two standard deviations from the mean.  The students presented their work with justification of their definition of what a viral video is.

The more traditional side of math education is teacher-centered where students rely on the teacher for information and practice the method that was taught to a level deemed by a percentage.  So do these two ends of the spectrum belong in the same classroom?

The other side of the argument is that a more traditional approach to teaching math is a better model.  According to Hansen and Gonzalez (2012) it was found that more traditional methods of note taking and using computers and calculators in class yielded high math achievement.  The study looked at middle school aged children in North Carolina, but did not have a separate group of students who participated in a project-based learning classroom. Still the evidence of more traditional methods of teaching and achievement were highlighted.


Sharing the stage:  Math content and twenty-first century skills
With the Common Core curriculum and Standards for Mathematical Practices underway, skills not associated with the math classroom are now sharing the spotlight with content standards.  Along with learning algebraic functions, statistical analysis and congruency with geometric shapes, students are encouraged to use appropriate tools in solving problems, critical thinking in making sense of the problem and model to tackle a problem.  Bell (2010) looked at how project-based learning develops twenty-first century skills in students.  As students work together, persevere through projects and give and receive feedback, they are modeling what adults do in their workplace. Students are encouraged to reflect how well they communicated, negotiated, listened and contributed to the project.


How do we measure achievement?
With the new Smarter Balanced exam to assess Common Core standards and objectively measure achievement in math in effect this year, it begs the question about how the other skills that have been deemed the eight Standards of Mathematical Practices will be measured.  Standardized tests may not do a holistic job in assessing a student’s achievement.  Will these skills be measured through the computerized test?  Could a computerized test measure things like creating a viable argument, critique a claim and persevering to solve a problem?   As a math teacher it is simple to think that math achievement is measured through percentages and number of questions correct. However, I want to measure achievement in other areas of the student’s ability in addition to their content knowledge.  How have their communication skills improved or not improved?  Does the ability to work on long and abstract tasks help perseverance?  Therefore, in looking at how project-based learning affects achievement in a math classroom, I am going to consider many facets of the word “achievement”.  I believe student surveys combined with formative assessment will help me gather a more accurate picture of math achievement in a project-based learning environment.
Action and Assessment Plan